Skip to main content
Writing in Health and Medicine, Spring 2021
Home / Social Health Sciences: Health Justice Conference Presentations / What Does Your Heart Say About You? An Analysis of the Environmental Factors Leading to High Cardiovascular Morbidity Among North Carolina African Americans.

Hello, my name is Matthew King and today I will be presenting my findings regarding the environmental factors that lead to greater morbidity among North Carolina’s African American Population.

Like many southern states, North Carolina grapples with its history regarding the degradation and oppression of its African American population. Dating back to the first freed slaves being exploited under the sharecropper system, to the era of Jim Crow and Segregation, and finally to the modern era and its cycle of poverty; African Americans have faced systemic barriers to the improvement of their living conditions. These barriers have had a measurable adverse effect on the health of African Americans. While much has been done to mitigate racism and implicit bias within the context of healthcare, little has been done to address the underlying factors that lead to greater incidence of cardiovascular disease and greater long-term mortality among African American patients. As such, my research has focused on identifying and proposing potential solutions to the environmental factors that lead to worse outcomes for African American cardiovascular patients in North Carolina. Specifically, the extent to which external factors such as lowered access to and appreciation of healthy foods and lifestyles, lower socioeconomic status, and inadequate access to quality care were examined to understand why the mortality rate among African Americans was so high.

Cardiovascular disease is a result of chronic damaging behaviors, and therefore cannot be mitigated in the same fashion as acute diseases such as viruses or bacterial infections. As a result, it is important to not narrowly focus on just inpatient and post-discharge care. By this point, much of the damage has already been done and treatments are focused on stopping further damage. Thus, in order to truly address the problems faced by African American cardiovascular patients, it is important to identify what behaviors and environmental factors led to their development of heart disease. Some of the most common risk factors include unhealthy diets leading to high rates of obesity, low physical activity, and cigarette smoking (Plescia et al., 2008).

The first logical area to address in regard to heart disease is diet, as cholesterol in the bloodstream is what causes the plaque buildups that raise blood pressure and cause cardiovascular disease (Heart Disease and Stroke | Healthy People 2020, n.d.). The higher rate of obesity among African American Populations is also responsible for a rise in blood pressure, as well as an increase in strain on the heart due to it having to pump to a larger volume of body mass. When surveyed by Pawlak &Colby in their study of perceptions regarding healthy foods, African American participants routinely recognized the health benefits of eating more fruits, vegetables, and whole grains and indicated that they largely believed that they should eat more of these items (Pawlak & Colby, 2009, p. 59). Where the participants lacked knowledge, however, was strategies to lessen the risk of heart disease and identifying foods high in cholesterol as seen in this figure. 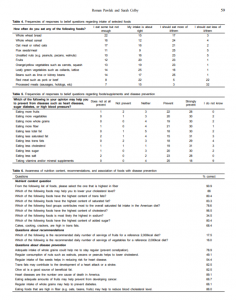 It was also outlined how the population’s “preferences for things African American… health beliefs and practices, racial segregation, and family values [resulted in] fewer servings of fruits and vegetables and more fat” (Pawlak & Colby, 2009, p. 61-62). This points to a lack of nutritional education, which is an important element of any program designed to mitigate heart disease risk among North Carolina’s African American population. To fully combat the cardiovascular disease epidemic in the African American population, cultural changes in dietary habits are a necessary step in addition to education.

While the study by Pawlak & Colby outlined cultural and educational factors in unhealthy diets, it also outlines how there were relatively few barriers to entry for African Americans except prohibitive costs (Pawlak & Colby, 2009, p. 61). This means that the only thing preventing those surveyed from eating healthier was cost, and independent of cost they would lead healthier lifestyles. Thus, if cheap, highly processed foods are the only available food option, then it is no surprise that those coming from lower socioeconomic backgrounds would have higher risk and incidence of heart disease. This data is supported by this figure, which shows that the odds ratio (a measure of how related two events are, with numbers greater than one representing direct correlation) indicates that socioeconomic status is one of the strongest indicators of developing heart disease.

The authors of this paper, Diez-Roux et. al, postulated that a number of factors such as decreased access to healthy foods, increased stress from working more service-oriented jobs, and decreases in exercise levels resulted in higher rates of cardiovascular disease (Diez-Roux et al., 1997, p. 60).

High stress caused by economic pressures like rent and bills combined with high intensity occupations can lead many to take up habits such as smoking for stress relief. Smoking contributes to cardiovascular disease in two major ways according to the FDA: damaging the blood vessels in the lungs, and altering the blood’s pH levels to points that allow excess plaque buildup (“How Smoking Affects Heart Health,” 2020). Over 20% of deaths due to cardiovascular disease are attributable to smoking (“How Smoking Affects Heart Health,” 2020), and with cigarette companies actively targeting poorer communities it is not a surprise that these communities are impacted the most by smoking. Though campaigns have been effective at reducing smoking from roughly 25% to 17.4% in North Carolina (Extinguishing the Tobacco Epidemic in North Carolina, 2020), further efforts to reduce this number through continued information campaigns would dramatically reduce the risk of African Americans developing cardiovascular disease.

Though the problem is deep and complex, cardiovascular disease risk among African Americans can be reduced by targeted information campaigns that raise awareness of the primary causes of heart disease among the population. A study done in Charlotte showed that advertising campaigns could be effective in combating the primary risk factors I have discussed. The study was conducted at a newly built community health center that worked cooperatively with the community to improve awareness of heart disease and implement solutions within the community (Plescia et al., 2008). Through programs such as a sponsored famers market and health workshops; the healthy food consumption and exercise rates increased and smoking rates decreased at a statistically significant level (Plescia et al., 2008). This model, due to being implemented in the city of Charlotte’s poorest areas, can serve as a model for realizing effective change within the community. Through a collaborative effort between government agencies, healthcare workers, and community leaders, cardiovascular risks can be mitigated within the African American community of North Carolina. The results of such a program being implemented statewide would likely be a reduction in the leading cause of preventable death within the state, which is in everyone’s best interest. Therefore, it is important to pressure leaders within the state to address the issue, as the impacts both socially and economically are not limited to just the African American community. Thank you for your time, and I hope that my presentation has brought to light the necessity of tackling the issue of heart disease among African Americans within North Carolina.

Image Source: “Lonely Heart” by Damian Gadal is licensed with CC BY 2.0. To view a copy of this license, visit https://creativecommons.org/licenses/by/2.0/