Skip to main content
Writing in Health and Medicine, Spring 2021
Home / Social Health Sciences: Health Justice Conference Presentations / Health Disparities among Rural Populations in North Carolina: The Issues and How to Solve Them

Health Disparities among Rural Populations in North Carolina: The Issues and How to Solve Them

Hello, my name is Lukas Sobocinski and today we are going to talk about Health Disparities that affect rural populations of North Carolina and dive into the roots of these issues. Rural populations have often been sidelined by their urban counterparts, with programs and funding being funneled into urban areas, but often ignoring rural populations who struggle just as much if not even more. Research has shown that there are also cultural stigma and traditions that help to lead to a poorer quality of life for rural populations, while also having a lack of access to healthcare options. I conducted secondary research to find the base root of these disparities, and what could be done to address such issues while also searching for solutions to these problems.

Over time, rural populations have been found to have poorer qualities of health when compared to their urban counterparts. Many of the health issues found stem from “cultural and financial constraints, often compounded by a scarcity of services, a lack of trained physicians, insufficient public transport, and poor availability of broadband internet services.” (Douthit 2015, 611) These are not easy fixes, as many of the issues just listed have existed in rural populations for some generations. Cultural and financial constraints block people from attempting to access healthcare in the first place. A scarcity of services means that when actual issues arise and people search out help, they are unable to find an adequate medical response as there are not many places open in a drivable distance or have the specialists needed to render correct aid. Insufficient public transportation and lack of reliable internet prevent people from reaching hospitals and places of aid by not being able to reach them physically or research the proper place to go.

In an area such as North Carolina, there is also a large minority population of African Americans in rural areas that carry along a stigma against going for help with regards to healthcare and the government. This comes from a historical background that prevented minority groups from receiving any medical attention at all. Minority groups in rural areas report more stress and health related issues caused by stress than their white counterparts which also adds to the health disparities found in the area. An effect of this is that “rural, non-white populations were more likely to report ‘fair’ or ‘poor’ health (as opposed to ‘good’ health) and obesity” (Knopf 2019). A part of this is the lack of numbers in rural communities. Large companies and fundraisers are generally not targeted to this audience because of the lack of people in the areas and the lack of people from these areas having the means to help and raise awareness. Larger companies often return to their roots, in cities where money flows and often ignore the surrounding areas that do not get as much exposure.

Many of the issues that exist stem from financial problems as well. Rural populations especially in the rural south like North Carolina make far less on average than their urban counterparts. This makes it harder for people to afford healthcare and to live a healthier lifestyle that would prevent them from having to go to receive care. In addition to the fact that residents of rural areas earn less money, “Rural residents have not seen the same health improvements as their urban counterparts, and population trends indicate that the disparity is large and growing”
(Richman 2019, 1). This shows that while there is an overall trend for increasing the quality of health for rural populations, rural places still fall far behind urban settings currently and in projections for the future. 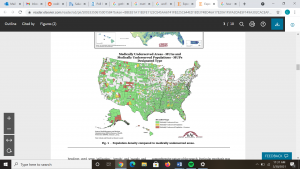 If I could bring your attention to the map over here, North Carolina is covered in areas that are medically underserved. “North central North Carolina, is federally designated as a medically under-served area/population” (Hill 2014, 2), and while there are many urban and well served areas in North Carolina, rural populations are being let down at an alarming rate. It is very concerning to see the amount of people that live in these underserved places as well, showing that this is an epidemic of quite severe proportions.

When more help is to be brought in, there must be a push for funding and accessibility. Above all, rural populations have to have the ability to use medical aid and be able to afford it. This can be pushed through government aid, either from the federal or state level. Once the hospitals and healthcare providers are in place, “effective health interventions should target rural obesity, joint disease, and poverty.” (Miles 2011, 813) By targeting those big three, there should be a large decrease in the more common roots of poor health in rural areas. More specified forms of illness will still be required to go to other areas for treatment, but with better health implementation, the roots of many common illnesses can be taken down at the root. The largest part of improving the health of rural populations though, is to preach prevention. By implementing more often checkups and healthier living, rural populations can avoid being dependent on aid to live healthier lives.