There are many outside factors that can lead to disease progression within the body. However, there are also less focused on internal factors that can progress diseases as well. Within this article, we focus on the internal factor of psychological stress and how it relates to cancer development and progression. Recent studies suggest that psychological stress is related to the functional alterations of immune cells which have common features of cells in the microenvironment of tumors within the body (Shin et al. 2016). At the University of California, Lamkin et al. researched how “activation of α –Adrenergic signaling promotes tumor progression as well as tumor initiation” (Shin et al. 2016). They found that the blockade of α –Adrenergic signaling by α -blockers prevented tumor growth and accelerated metastasis through stress within cancer patients. New research within this field raises further concern for the average American, as cancer is the number one cause of death, killing 9.6 million in 2018 alone (WHO 2018).

Some basic knowledge that is useful to know about the topics of the study is that α –Adrenergic receptors are a class of G protein-coupled receptors. They are targets of many catecholamines produced by the body. α –Adrenergic receptors are associated with many malignancies, including lung cancer and breast cancer (Huang 2018). This article goes into more detail about how stress is related to these receptors and therefore, how stress is linked to cancer progression.

The main study focused on within this article was conducted at the University of California, Los Angelos by Donald Lamkin et al. and published in 2015 in Psychoneuroendocrinology. Lamkin is an Assistant Professor of Psychiatry and Biobehavioral Sciences in the UCLA David Geffen School of Medicine and a research scientist at the Cousins Center for PNI. He is involved in many cancer centers within UCLA and the country. More recent studies have identified that “specific signaling pathways can impact cancer growth and metastasis” (Moreno-Smith et al. 2010). Previous studies have also shown that stress can “enhance disease progression by increasing catecholamine levels” (Lamkin et al. 2015). Their study compared previous findings by testing how, under stress and non-stress conditions, a blockade of α –Adrenergic receptors would affect breast cancer progression within mice. The researchers hypothesized that, just as catecholamines signal β -Adrenergic receptors, they can also signal α –Adrenergic receptors. When signaled, α -Adrenergic receptors have been known to promote breast cancer in vitro and vivo. Knowing that cancer is the uncontrolled growth of abnormal cells within the body, these studies help to provide answers as to how, at the molecular level, internal factors such as stress led to the progression of the bodily processes that induce and headway cancer. One thing that scientists and researchers do know for sure is that “‘stress makes your body more hospitable to cancer’” (Heid 2014). It is becoming increasingly important for studies to be conducted in order to truly understand the impact that psychological stress has on the body and how those impacts could lead to cancer progression.

Obviously, the idea of animal subjects within these studies remains uniform. Within this study the scientists used female orthotopic mice models. The mice were kept in individual cages and their protocols were approved by the Institutional Animal Use and Care Committee of the University of California, Los Angelos. Some of them were kept in control cage conditions while others were kept in restraint for two hours per day for twenty days commencing five days before tumor cell injection. A highly metastatic derivative of the human breast adenocarcinoma cell line was transduced into the left fourth mammary fat pad of each mouse. The tumors were measured consistently using digital calipers. α –Adrenergic receptor blockades and phentolamine were injected at five mg/kg daily for the duration of the experiment, starting five days before tumor cell injection. Some of the mice received a placebo. It was seen that “chronic restraint increased the growth rate of primary tumor by 2.5-fold versus controls” while also significantly increasing the “metastasis of primary breast tumor cells to distant tissues by an average of 4.5-fold versus controls” (Lamkin et al. 2015). The non-selective α –Adrenergic blockade by phentolamine significantly inhibited the effects of chronic restraint on tumor and metastasis growth within the mice. These results support their hypothesis by showing that blocking these receptors with phentolamine helped to decrease the effects of stress on cancer growth and progression. 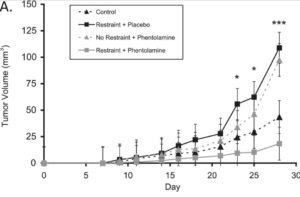 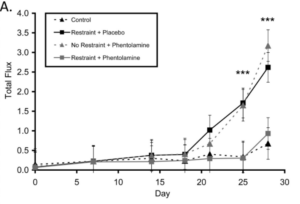 While there are no ethical conflicts to be found within the article of the study, there are some limitations to the study. One major drawback is that the results may not be completely attributable to human subjects as efficiently as they are attributable to the mice subjects. Knowing that the studies are done on mice, there are obviously differences between the bodily systems within a mouse and those within a human subject. Another drawback that was stated within the article is that “although ADR antagonists seem to be a promising therapeutic target for inhibiting many of the pathways, several issues need to be resolved to establish the translational potential of ADR blockers in cancer therapy” (Shin et al. 2016). This means that they are admitting limitations to how successful these therapeutic targets will be in blocking many of the pathways that stress-related cancer progression takes. On the other hand, the design of studies like this one and others that are similar is that the experiments can be repeated for greater confidence in representability. This makes current research more legitimate due to the decrease in random and systematic uncertainties that may be present within the experiment design.

Overall, learning more about how one’s mental health can contribute to their physical health can lead to many life changes in order to prevent the progression and development of many possible diseases, including cancer. There are many connections between the types of stress that one can experience and their overall health that can be taken away from this study and many others just like it. While there are many ways research within this field needs to progress, one future step these researchers could take is to use “blockers combined with conventional anti-cancer drugs” (Shin et al. 2016). The use of blockers is worth considering in order to advance current therapeutic effects. One thing we know for sure is that stress affects more of one’s microenvironment than they may think, and this article and its current studies point out those connections down to a molecular level.