Sex selection is a new technology on the rise that is conducted by fertility clinics across the world via pre-implantation genetic screening procedures. Various cultures and communities raise concerns on this technology due to its ethical implications when performed for non-medical reasons, specifically. A recent study conducted in 2017 compiles the statistics and patterns of sex selection services for non-medical reasons in US clinics in an effort to characterize clinics and analyze the corresponding ethical considerations. The study’s findings reveal a large percentage of US clinics conducting sex selection procedures for non-medical reasons, raising important questions and concerns about implicit ethical biases that should be considered and inquired about.

More specifically, this 2017 study was conducted in the United States by a group of Emory Medical School students, including Sarah M. Capelouto, Sydney E. Archer, Jerrine R. Morris, Jennifer F. Kawwass, and Heather S. Hipp. The study was funded and spearheaded by the Emory Medical School, before being published in 2018 by the peer-reviewed Journal of Assisted Reproduction and Genetics. The study was inspired by a societal trend that the researchers noticed– an increased use of preimplantation genetic screening technology in recent years. This trend raised concerns, as sex selection technology is highly controversial in the scientific community due to its prominent ethical considerations, financial risks, and medical risks. Sex selection is also a non-emergent, elective procedure on the basis of desire and preference, rather than medical necessity. Originally, sex selection was intended to identify known sex-linked genetic disorders in a family’s offspring, however it is being increasingly utilized for non-medical purposes, commonly known as “family balancing” (ASRM 2015). Furthermore, this technology has the potential to open up a slippery slope of other ethically controversial preferential genetic modifications in children, in other words known as “designer babies”.

These considerations and risks were observed from the works of other peer-reviewed journals and committees, including the Ethics Committee of the American Society of Reproductive Medicine and the American College of Obstetricians and Gynecologists Committee on Ethics. Given this, the researchers aimed to quantitatively study the true percentage of sex selection for non-medical reasons in the US, characterize US fertility clinics by the results, and qualitatively compare and contrast these clinics with those not offering sex selection services. These analyses intended to respond to, supplement, and provide context for the concerns raised in the works of the ethical committees mentioned above, such as the positive and negative arguments surrounding sex selection for non-medical reasons presented by the ASRM and the societal opinions on sex selection in a German society presented by the ACOG (ASRM 2015; ACOG 2007).

To conduct the study, the researchers compiled a list of clinics and their contact information using the CDC 2015 Fertility Clinic Success Rate Report, as well as other fertility clinic resources and databases (CDC 2015). More details about each clinic were collected, and the clinics were organized into four geographic regions– West, South, Northeast, and Midwest– before being categorized by population size. Additional data on pre-implantation genetic screening, in vitro fertilization cycles performed, and non-donor egg live birth rates were collected to gain perspective on the success of treatments at the clinics. Next, each clinic website was searched and analyzed for information about sex selection services and the corresponding purposes. A phone interview was conducted for each clinic consisting of three survey questions from the perspective of a medical student. Each interview followed a set script and was only altered in the case of needing further clarification or information. Regression analyses were performed using chi-squared tests and probability models, to identify a correlation between sex selection question responses, geographic region, clinic type, CDC status, population size, and total IVF cycles.

The main findings of the study revealed that sex selection for family balancing was conducted by 93% of clinics (324 clinics), and 81% (281 clinics) reported performing the service for elective purposes, such as special patient preference (Capelouto 2017). For couples opting into sex selection without infertility as a primary motive, 83.5% (289 clinics) of clinics offer sex selection for family balancing and 75% (258 clinics) for elective purposes (Capelouto 2017). Overall, the study methods were conducted in a way that was streamlined, consistent, and reduced error. However, potential sources of bias or error were clinics that did not respond to the survey, and the fact that that no information about the interviewees at the clinics were gathered to consider potential bias or lack of knowledge in their answers to the survey questions. 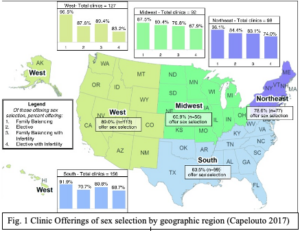 The results of the study provide insight into how common this procedure is and where it is most common in the United States, which may be useful information for someone considering sex selection to keep in mind. Based on the results, sex selection for non-medical reasons is demonstrated to be conducted mainly for family balancing, which means a desire to have equal amounts of male and female children. Additionally, the service is conducted far more by private clinics, and in urban southern cities. The majority of clinics do not share information about the sex selection service on their websites as well. These small details and nuances in the data reports are important, as they spark thought and questions about the implicit ethical implications of the service. For example, why do clinics feel a need to hide information about sex selection from their public platforms? Are private clinics conducting more sex selection because they are not bound by government restrictions, and if so, are those restrictions significant? Does the relatively conservative demographic in the Southern region of the United States imply underlying gender biases in those choosing sex selection?

Today, these questions are still left unanswered yet shouldn’t be. The unknown ethical risks associated with sex selection technology weigh heavy on the scientific community and have the potential to affect or hinder other avenues of genetic technology and research. Future research should continue the work of this Emory Medical School study to strive to analyze and search for answers to these pressing questions to gain clarity on the true implications of this technology, its consequences, and preventative actions needed to be taken.