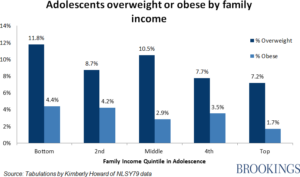 Hello, my name is John, and today we will be presenting on the epidemic facing the United States known as Obesity. Statistics have proven time and time again that the United States is heavier than most other nations in the world. Nearly 40% of American adults of the age of 20 and up are considered to be obese. Also, 70% of American adults of the age of 20 and over are above the weighted average. Obesity is considered to be a national epidemic and is a major contributor to death in the United States due to its prevalence with conditions such as heart diseases, stroke, diabetes, and even cancer. Policies that promote access to healthier and affordable food options in low-income communities are needed to combat this issue facing our nation. The question being asked is if there is a correlation between socioeconomic status and obesity in the United States, and the answer is true yes. People in low-income communities, the majority of people of color, are disproportionately more at risk for obesity and death due to co-occurring health consequences such as heart disease, diabetes, etc. The studies that brought together this finding include the ratio of women who were obese or overweight in a sample population of low-income women and the effects low-income backgrounds have on obesity with school-aged children. With this gathered information, and with the data provided in the multiple studies, it was evident that there is a correlation between low socioeconomic status and obesity. According to the data presented in the graph, children from low-income families are both more obese and overweight than those in higher levels of the income bracket. It was also proven that those who were on the lower end of the income spectrum were more likely to be obese or overweight than those with a higher socioeconomic status. To effectively combat this issue, it is extremely vital that the United States gets more involved at the federal level by implementing policies that improve access to healthy affordable produce in low-income communities. In schools, proper nutrition should be taught and practiced by making sure that students are eating whole and nutritious meals. It is also vital that the issue of food swamps in these areas is also addressed as most food chains are located in clusters in low-income areas. This is an issue because individuals that live within these areas, over some time, begin to believe that frequent eating at fast-food chains is of normalcy further increasing their outcome of obesity. Acknowledging that low socioeconomic factors play a role in obesity is the first step, and implementing policies to combat obesity in our nation is the second step to increasing the longevity of citizens across the country.

Obesity is a problem challenging the nation as a whole and specifically North Carolina. With obesity comes other co-occurring factors such as coronary heart disease, stroke, type 2 diabetes, and several forms of cancer. As stated by the Eat Smart Move More movement (ESMM) of North Carolina, “the high rates of overweight and obese people in our state and nation cause decreases in the life expectancy, productivity, and quality of life,” (ESMM, 2020). With the issue of obesity, health-related factors lead to an increase in the cost of healthcare for individuals. These health-related factors not only affect individual revenue but also has a substantial financial impact on the overall health care system, as well as the economy. The lack of access to healthy foods for people with low socioeconomic status is a reason why there is a greater likelihood of obesity among people of low-income backgrounds.

Socioeconomic status has been a determinant of social standing in correlation to an individual’s level of education, income, and occupation. Obesity, on the other hand, is an issue that affects the vast majority of individuals in the United States directly and indirectly. With that, several types of research have proven the parallel between an individual’s socioeconomic status and their likelihood of being obese to be true. People from low-income backgrounds are indeed more likely to be obese than those that those who are much wealthier.

A study conducted on children by the researcher, Michael Schulman, and analyst Dr. Joy Piontak from Duke University, tracked third to fifth graders from 317 urban and rural North Carolina schools. The purpose of this study was to look into children’s geographic location, school poverty levels, and how these multiple factors affect the possibility of childhood obesity. The premise of this study was that schools play a huge role in childhood obesity. According to research and findings were done by Michael Schulman at North Carolina State University, “North Carolina children living in rural counties or attending high-poverty schools are more likely to be obese.” (Kellner, 2016). In the study, both researchers found that low concentrations of poverty at a school level are associated with lower odds of obesity and that schools in rural counties had significantly higher rates of obesity.

Furthermore, a study was conducted looking into obesity and co-occurring factors that are an outcome of obesity. The study focused its methods on identifying why the contingency between obesity and its co-occurring factors have varying outcomes between low-income African American women and white sample populations in several counties within North Carolina. In low-income African American women, fifty-nine percent were obese and twenty-eight percent were overweight meaning that a total of eighty-seven percent were much heavier than the overall low-income sample population, whereas in low-income white women thirty-five percent were obese and thirty-four percent were overweight which means that sixty-nine were heavier than the overall low-income sample (Nelson et al., 2002). This serves as a substance to an answer that there is indeed a correlation between obesity and low socioeconomic status (Nelson et al., 2002). In addition, such co-occurring factors, for example, coronary heart disease is more prevalent in black people and they are also at much higher risks for death due to many factors such as socioeconomic status and racism in healthcare settings.

In a study conducted at the University of North Carolina, the main focus was to examine low-income women specifically and the comparison between their environment and access to grocery stores. They held surveys and asked a sample of one hundred and eighty-six women if they considered their neighborhood stores to be high in healthy food options, and the results proved that “individuals who lived in census tracts with a convenience store and a supercenter had higher odds of perceiving their neighborhood high in the availability of healthy foods than individuals with no store” (Gustafson et al., 2011). Lastly, the results suggested that those who lived in a census tract (subdivision) with a grocery store or supercenter were those to have consumed fewer servings of fruits and vegetables. Also, those same groups of individuals weighed more in total than those that didn’t live within proximity to a grocery store.

Having examined the ties socioeconomic status has on obesity from multiple different angles, it is evident that people with lower socioeconomic status are much more at risk of obesity and are far more likely to suffer its consequences as a result. To effectively combat this issue, it is extremely vital that the United States gets more involved at the federal level by implementing policies that improve access to healthy affordable produce in low-income communities. In schools, proper nutrition should be taught and practiced by making sure that students are eating whole and nutritious meals. Acknowledging that low socioeconomic factors play a role in obesity is the first step, and implementing policies to combat obesity in our nation is the second step to increasing the longevity of citizens across the country.

Gustafson, A. (2011). Perceived and Objective measures of the food store environment and the