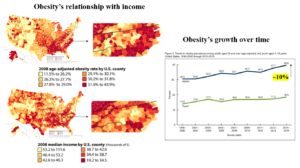 Hello everyone. Today I will be speaking about obesity in North Carolina, specifically with how it relates to low income populations. Obesity is a serious and growing problem in the state. As you can see in the graph on the right, obesity rates have increased greatly from about 30 to 40 percent in the last 20 years. (National, 2016, p. 2; Crawford, 2002, p. 728).  Impoverished communities experience disproportionately higher obesity rates, evident in the obesity rate vs median income diagrams shown on the left. (Levine, 2011, p. 2667; Dawson-McClure et al., 2014, p. 152). I am going to discuss why this discrepancy occurs, and what can be done to ameliorate it.

The two main causes of obesity are lack of exercise and excessive/poor food consumption habits. Low income communities experience higher obesity rates compared to other income groups because its members tend to burn fewer calories through lack of physical activity and consume more calories through a poor diet.

The amount of physical activity in low income populations can be diminished due to fewer facilities, like parks and sports fields, and more violence, which discourages exercise outdoors, among other reasons (Ghosh-Dastidar et al., 2014, p. 589; Levine, 2011, p. 2668).

Obesity leads to many health costs, which include increased risk of type two diabetes, high blood pressure, stroke, among many other things (United, 2021, p. 5). However, education-oriented and structure-oriented programs, when used in conjunction, have the potential to decrease obesity rates and protect North Carolinians from the negative effects it brings.

Obesity is a serious and growing problem in North Carolina, not to mention in the United States as a whole. The 2016 CDC state obesity profile found that almost a third of ten million citizens were obese, a dramatic increase of over ten percent in the past two decades (National, 2016, p. 2; Crawford, 2002, p. 728). Impoverished communities, which compose roughly fifteen percent of the North Carolinian population, are especially prone to this disease and experience disproportionately higher obesity rates (Levine, 2011, p. 2667; Dawson-McClure et al., 2014, p. 152). Significant causes of this trend include discrepancies in exercise opportunities and food consumption habits, and the most promising solutions to counteract it will involve simultaneous education programs and infrastructure improvements. Rising obesity rates, especially those in low income communities, must be understood and combatted effectively to lessen obesity’s detrimental effects on personal wellbeing, healthcare costs, and national productivity.

Ultimately, there are countless variables that influence obesity rates in a community, including but not limited to income, education level, race, and sex (Ogden et al., 2017, p. 1370). As a result, the association is very complex. When considering just income level, however, there is a significant relationship between lower income and higher rates of obesity. According to the National Health and Nutritional Examination Survey, the lowest income group experienced almost 10% greater obesity rates compared to the highest income group (Ogden et al., 2017, p. 1370).

Causes of obesity fall into two general categories: lack of exercise and poor/excessive food consumption habits. Food consumption inputs calories, and physical activity (along with maintaining normal body functions) expends them. A combination of too much consumption and too little physical activity leads to weight gain and eventually obesity. Differences in obesity rates between high- and low-income communities can therefore be explained by differences in these two categories. It should be noted that while genes can influence weight gain, obesity cannot be attributed to genetic factors because obesity rates have increased faster than genetic makeup can over time (Crawford, 2002, p. 729).

The amount of physical activity in low income populations can be diminished for multiple reasons. Firstly, more impoverished regions tend to have more violence, which would discourage people from being active outdoors (Ghosh-Dastidar et al., 2014, p. 589). Furthermore, low income neighborhoods typically have fewer parks, public sports facilities, and after school recreational programs—all of which foster exercise—and their residents are less likely to be able to afford gym memberships and sports equipment (Levine, 2011, p. 2668). Lower income jobs can also require long hours, leaving less time to pursue individual exercise. All of these factors contribute to a more sedentary lifestyle, which burns fewer calories and leads to obesity.

The second main cause of obesity, food consumption habits, is even more influential than lack of physical activity. A study found that BMI, a measurement used to determine obesity, is more strongly related to discretionary calories (junk food) consumed than fruit/veggie intake or physical activity levels. In other words, even if a person has a rigorous job and exercises in their free time, they can still become obese because of a poor diet. While lean, healthy foods like grilled chicken, brown rice, and broccoli are low in fat and sugar, high in vitamins, and are filling, highly processed foods like candy, chips, and soda, are low in nutritional value, high in caloric content, and leave you feeling hungry soon after eating them. A diet consisting largely of “junk food” or “empty calories” leads to excessive calorie consumption, which greatly contributes to obesity (Sturm et al., 2011, p. 2).

Because such a wide variety of obesity causes exist, it is hard to pinpoint the perfect solution. With that said, overarching strategies to fight obesity can include increasing awareness and knowledge of the community as well as improving community policies and infrastructure. Educational programs can teach adults how to read food labels, calculate calories and fat, incorporate nutritious foods in their typical meals, and how to incorporate exercise in a busy schedule (Crawford, 2002, p. 728). Additionally, schools can offer healthy living curricula that discourages unhealthy products like soft drinks and promotes healthy eating and staying active (United, 2021, p. 5). These efforts towards greater obesity awareness and education can help a community improve its dietary and exercise behaviors.

Interestingly, both types of obesity prevention strategies have been relatively ineffective in the past when implemented on their own (Crawford, 2002, p. 729; Dawson-McClure et al., 2014, p. 156). Improving the education of a community is only helpful if infrastructure exists for people to utilize—there is no use teaching someone how to eat healthy if they can’t access healthy food to begin with. Similarly, improving infrastructure doesn’t do much good if a community doesn’t know the importance of using it. For example, a study found that substantial changes to school food showed minimal impact in influencing obesity rates, since people opted for other options like vending machines and nearby fast food restaurants (Dawson-McClure et al., 2014, p. 158). When used in conjunction, however, education-oriented and structure-oriented programs have the potential to decrease obesity rates in low income communities and high-income communities alike.

Obesity is a truly concerning problem in our society, both financially and medically. Medical expenses for obese individuals are almost 1500 dollars greater annually compared to those of normal weight (Eat, 2020, p. 3). This phenomenon creates a harmful cycle for impoverished populations: low income situations lead to obesity, which in turn accentuates the low-income problem due to expensive healthcare costs. The health costs of obesity are also daunting: obesity increases the risk of type two diabetes, high blood pressure, stroke, arthritis, sleep apnea, breathing problems, multiple types of cancer, and mental illness; and diminishes overall quality of life (United, 2021, p. 5). Hopefully, widespread, multifaceted solutions to the obesity epidemic will be enacted in the near future to reverse the tide of growing obesity rates in North Carolinians, especially those low-income groups, enabling them to live better lives.

The Food Trust, The North Carolina Alliance for Health. (2018). Food for every child. The need for healthy food access in North Carolina. http://thefoodtrust.org/uploads/media_items/food-for-every-child-north-carolina.original.pdf

Hayes, M. (2013). Before and after pictures of man with 16 months nutrition and exercise changes and losing 180 lbs. [image]. https://depositphotos.com/21010815/stock-photo-weight-loss-success.html