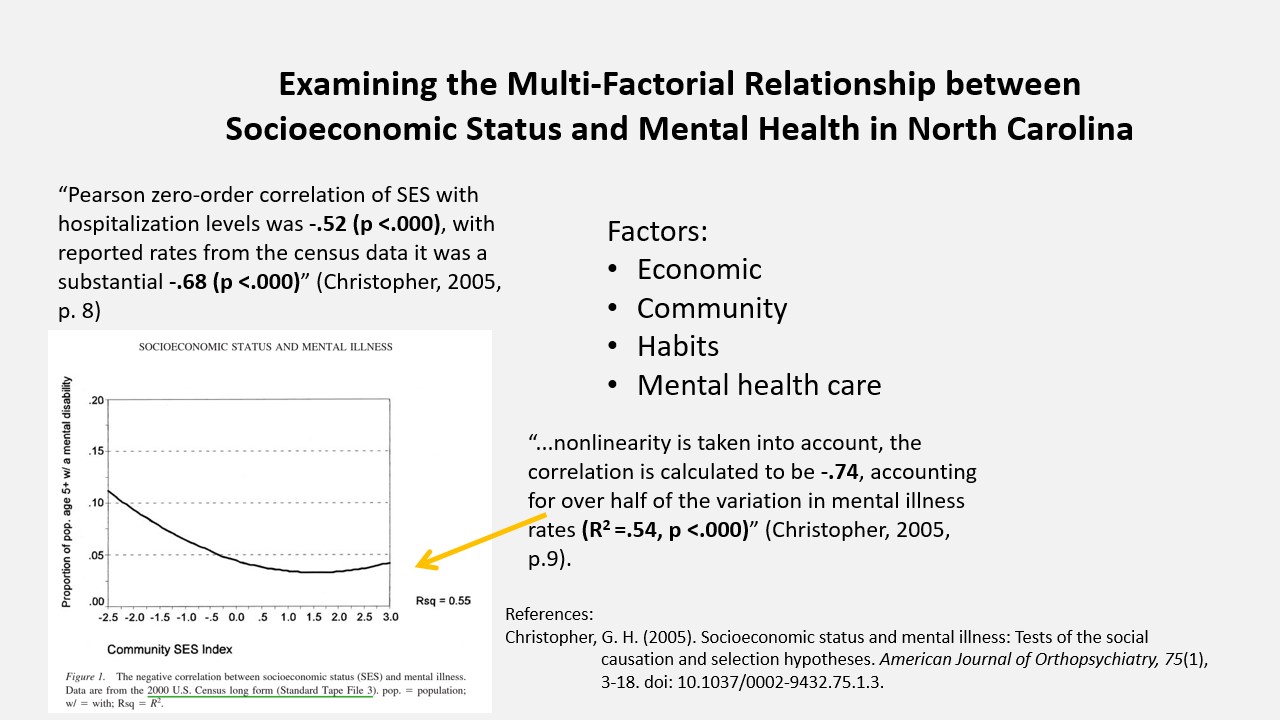 Morning, my name is Joseph and my presentation would explore the multi-factorial relationship between Socioeconomic Status and mental health in North Carolina.

Researchers have long been paying attention to the negative correlation between SES and mental health, but the underlying reasons for such correlation are unclear. My research investigates such relationship and presents some of its interrelated causal factors with corresponding solutions.

Another meta-analysis study elaborated on this correlation and discovered low SES would more likely trigger mental health problems comparing to the fell of a mentally ill person off the SES spectrum. Additionally, their stress and strain theory suggest that a person’s ability and resources to manage stress and their environmental strain factors like work, family, and neighborhood safety vary due to their SES status (Lorant et al., 2003).

Some other studies elaborated upon stress and strain and revealed a “vicious cycle.” Hodgkinson et al. in 2016 suggests that poor families would face stressors like poor housing, food insecurity, inadequate schools, and increased crime rate. Poor residents in some communities would devote one third even to one half of their subsidized income to cigarettes, alcohol, and drugs, which undermines their mental state (Wilton, 2003). Lack of mental health access makes it worse, which includes long travel distance to clinic, lack of insurance, inaccessible clinic opening hours, and negative stigmatization.

North Carolina has 13.6% poverty population. Consequently, improving the problem is urgent and has several incision points like improving housing conditions, having accessible mental consulting stations, educating on quitting smoking and alcoholism. Such actions could hopefully help thousands of mentally distressing individuals get back to the normal track.

Mental problems can have devastating effects without paying proper attention or medical aid, which especially makes low-income families vulnerable. Researchers have long been paying attention to this problem. The study carried out by Robert Faris and Warren Dunham in 1939 is one of the first studies that correlates socioeconomic status (SES) and mental illness state, which found disproportionately more mental illness cases in the poorest part of Chicago. This study pioneered a large horde of research that examined such correlational relationship between SES and mental health around the globe with a relatively consistent relationship (Christopher, 2005). North Carolina, ranking 41st of the national median household income, sits among the discussion. While most of the research is about the statistical research of demographic indicators, research concerning the underlying reason and causes of such correlation is few. In this essay, I will first explain this negative correlation and then present some of its causal factors, with an emphasis on the interacting role they each play in this problem. This discussion will point out some factors that could potentially be solved to improve such disparity.

Since its debut in 1939, a negative relationship between SES and mental health has been observed repeatedly while statistical data lack the ability to provide detailed reasons or patterns. A study by Christopher G. Hudson in 2005 illustrates this problem utilizing data from the United States: acute psychiatric hospitalization in the Commonwealth of Massachusetts of fiscal years 1994-2000 and the 2000 U.S. Census. The statistical results indicated a moderate to strong negative correlation between SES and mental health at around –0.52 to –0.68 with p-value smaller than 0.000 when using different data sets. The author also used a non-linear relationship to model the community SES and mental health and arrived at a strong –0.74 correlation (Christopher, 2005). Furthermore, the author put forth 5 hypotheses that explained such negative correlation, which considers stressful economic conditions, lack of family support, movement of patients after initial hospitalization, declining employment, and decline in community SES level. Due to lack of detailed data from the dataset studied, none of the hypotheses could be proven by using statistical tests. On top of that, there is problem with the non-ideal hospitalization data which does not include those who did not go to the medical provider (Christopher, 2005). Chris’s study provides United-States-based evidence and points out such weaknesses on the way to further understanding the causal-effect relationship of this problem.

Cross-linking studies together have provided some more comprehensive insights. A meta-analysis in 2003 by Lorant et al. gathered 59 studies meeting the criteria regarding populational depression and mental health problems. As part of the criteria, the studies are required to have some indicator of subjects’ wealth, income, or socioeconomic status to be selected. Lorant et al. have not only arrived at a consistent result regarding Christopher’s study, but also arrived at the conclusion that “causation… has the edge over selection…although both processes are at play” (Lorant et al., 2003, p. 107). Causation effect is defined as lower SES and income condition would be more likely to trigger depression and mental illness responses, while selection effect emphasizes that patients suffering from depression or mental illness fell from the higher end of the SES spectrum to the lower end. Additionally, the stress and strain theory accounts for some of the reasons for such correlation (Lorant et al., 2003). According to the stress theory, a person’s ability and resource to manage personal stress might differ across SES and lead to such disparity. The strain theory, despite having conflicting evidence, emphasizes the role of environmental factors like values, social welfare, infrastructure, and public health policies.

Beyond stress and strain, some other studies provided deeper insights. Families living in poverty would face a unique set of stressors like poor housing, food insecurity, inadequate schools, and increased crime rate (Hodgkinson et al., 2016). Such factors like lacking healthy food would negatively impact residents through lack of nutrients and higher risk of illnesses like obesity; inadequate school might associate with social isolation and bullying; increased crime rate would expose residents to a constant stressful environment. All these factors would make residents feel prolonged anxiety and insecurity, which could trigger the development of mental conditions. Being impoverished, residents are more likely to devote part of their income to addictive recreations like cigarettes, alcohol, and drugs (Wilton, 2003). As one interview of individuals from residential care facility tenants points out, some tenants would spend one-third to one-half of their financial aid (they do not have income) on cigarettes. As one interviewer explained his alcohol consumption: “Maybe you’d like to go for a coffee. Me, I’d like to go for a beer [laughs]. Course, you can’t put that down, but it’s socializing [laughs]! Whether you go for a coffee or go for a beer. It doesn’t matter what you go for…” (Wilton, 2003, p. 145). Lack of mental health access also exacerbates the condition, which includes long travel distance to clinic, lack of insurance, inaccessible clinic open hours while at the job, and various negative stigmatization (Hodgkinson et al., 2016). Such factors elaborate beyond those deceivingly simple answers and revealed a “vicious cycle” — being of lower SES leads to many disadvantages that contribute to poor mental health, and those factors also reinforce the impoverished state, creating a circle. For example, devoting income into cigarettes and alcohol would take up family living budget, contribute to increased family fight and violence, create anxiety and craving, and impact young children’s family environment.

As these studies sample comprehensively from the United States and across the globe, such findings persist in North Carolina. The state has 13.6% of residents living in poverty, which is 1.3% above the national average (United States Census Bureau, 2019). North Carolina residents face lack of insurance and limited mental health care access (Swartz & Morrissey, 2003). Coupled with urban-rural disparities and income distribution across counties, improving North Carolina residents’ mental health, especially for those of low income, is urgent. As pointed out, reducing effects of exacerbation might help address such SES-mental health disparity. Specifically, community council could organize inspections of residents’ house condition and address their life inconveniences; public lectures could be given to help residents quit smoking and alcoholism, and instead invest their money into beneficial practices for their families. Additionally, psychological consulting stations that move around different communities at residents’ resting hours could be carried out to supplement limited mental health access due to residents’ prolonged working hours and geographic barrier.

Although the general pattern of SES and mental health is well studied, factors contributing to such patterns are complicated and interconnected, including community environmental factors that lead to anxiety, addictive goods consumption, and lack of mental health access due to multiple reasons. Starting with some of these factors, the North Carolina government could start community-based support programs which could potentially provide thousands of individuals relief from mental illness and even from suicide.