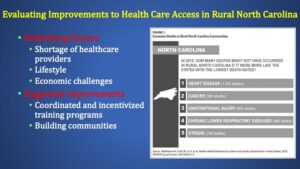 Citizens in Western North Carolina are subject to the highest rates of poverty, cardiovascular disease, substance abuse, and psychological disorders in our state. It has been well established that the Western North Carolina region desperately lacks the needed health care professionals for services like primary care, OB/GYN, and psychiatry. While the NC legislature, health department, and medical colleges have taken steps to ameliorate this issue, many residents feel that these policies have been inadequate. The primary factors result from significant shortages of physicians and other qualified providers as well as unhealthy lifestyle habits. According to Collins’s 2016 paper, the rural healthcare workforce has been weak for a long time; however, not until recently has there been an urgency to fill these positions (Collins, 2016, p. 99). Maintaining healthcare workers in this region is a challenge because often the available positions are compensated less than similar employment opportunities in highly urban districts. Additionally, researchers believe that declining economic conditions in many of these communities has diverted citizens’ attention away from healthy lifestyle habits. They posit that annual income might vary many factors that influence an individual’s overall well-being through dietary choices, exercise, and behavior (Su Wen Gan et al., 2019, p. 815). Experts suggest that a two-fronted effort be used to confront this issue by establishing medical training centers with incentives for maintaining staff coupled with increased economic opportunities for communities to promote healthy living. Despite NC lawmakers’ and educators’ efforts to resolve healthcare inequities, the challenge of retaining health care professionals has persisted consequently limiting the enacted policies’ intentions. Considering the evolution of the medical field advocates are optimistic that residents of rural NC will soon have improved access to the healthcare they deserve.

Health is a holistic idea that encompasses the well-being of both the mind and the body. As humans, we inherently desire a lifestyle of autonomy and self-improvement which is dependent on our individual relationship with our health. While we aspire to minimize aliments and unnecessary suffering, disease is an inevitable part of life. Although well-being is unique to each individual, many hold that equal access to care and quality of treatment should be maintained because the principle of health is universal. While society has come to expect this, equality is abridged in some cases due to race, sexual orientation, social determinants, and – interestingly – geography. In particular, citizens in rural regions of North Carolina including Western NC are subject to the highest rates of poverty, cardiovascular disease, substance abuse, and psychological disorders in our state. Research has already established those rural regions of the state desperately lack the needed health care professionals for services like primary care, OB/GYN, and psychiatry. Despite NC policymakers’ efforts to resolve health care inequities, the challenge of retaining health care professionals has persisted consequently limiting the policies’ intentions.

One of the primary factors that underlie this healthcare inequity is the statewide shortage of healthcare providers, especially in rural areas. According to Collins’s 2016 paper, the rural healthcare workforce has been weak for a long time; however, not until recently has there been an urgency to fill these positions (Collins, 2016, p. 99). Experts worry that the changing landscape of the healthcare field will only serve to exacerbate this deficit. Collins suggests that educational development should be aligned with North Carolina’s labor goals. Essentially, education systems should encourage students to study to join the healthcare workforce. Some findings suggest that the lack of recruitment and admittance of students into medical programs from rural areas contributes to an insufficient amount of health care workers (Collins, 2016, p. 100). Many students from rural areas feel connected with their home and seek to return. Without including a proportional number of candidates from rural regions, there is an increased challenge to recruit healthcare workers for these areas. At the time of Collin’s paper, the East Carolina University Brody School of Medicine was the only NC Medical School to establish a comprehensive rural medicine residency program. Data taken from the 2003 graduating class found that after only ten years 3% remained practicing medicine in rural NC (Collins, 2016, p. 100). Disappointing statistics like these suggest that the implemented programs do not function as they were designed.

Additionally, rural counties have significantly different social and economic patterns that influence overall health among residents. An interesting 2019 study found that highly rural counties in NC face a nearly 40% increased incidence of Sudden Unexpected Death (SUD) compared to highly urban counties (Su Wen Gan et al., 2019, p. 815). Researchers posit that lifestyle differences may be the differentiating factor. For instance, a higher incidence of SUD in rural areas is strongly correlated with lower household income than relative healthcare access (Su Wen Gan et al., 2019, p. 815). This seems to suggest that declining economic progress in rural NC has not only affected lifestyle, but also the quality of health of residents in these areas. An individual’s income might vary many factors that influence their overall well-being. This includes dietary choices, exercise, and behavior. In a similar respect, researchers also believe that these negative tendencies mainly increase the incidence of obesity and illicit drug abuse. However, according to experts, these medical issues seem to be deeply related to income. For example, increased rates of obesity in rural counties are likely due to difficulties supplying and purchasing expensive, fresh, and nutritious foods – especially considering prepackaged foods can be better preserved and sold cheaper. Alternatively, substance use is usually a sign of stress and negative emotions (Su Wen Gan et al., 2019, p. 816). Again, weakened economic progress in rural NC strains families driving them to turn to drug use as a coping mechanism. As a result, some researchers believe that improving economic conditions could be effective for creating healthier lifestyles.

Considering the underlying issues and ineffective attempts to ameliorate rural access to healthcare, most experts have suggested multifaceted approaches that coordinate comprehensive rural medical training and mobilize communities. While some statistics have shown that “rural residency” programs have done little to improve rural healthcare access, experts point to the fact that past initiatives have not been coordinated with other programs and the state’s priorities. Irons and Sauer highlight the prospect of the 2018 NC House Bill 988 that designated rural teaching hospitals and offered graduate medical education funding to incentivize prospective physicians to work there (Irons & Sauer, 2018, p. 368). While many medical graduates feel the need to work higher-paying jobs in urban districts, legislation like NC HB 988 will hopefully compel these graduates to consider rural medicine knowing that they will receive additional compensation for their loans. Establishing teaching hospitals in rural NC counties will hopefully expand these hospital systems and provide a steady stream of qualified providers.

Despite the explicit need for healthcare workers, many experts look to economic revival to improve health care access. While interviewing generational residents in Western NC Scott concluded that the communities thrive on their collective values (Scott, 2019, p. 991). Consequently, researchers believe that actions that strengthen the community and emphasize healthy living might be effective. In particular, advocates push for economic revitalization. While this might seem unrelated, experts reason that significant poverty is the main issue for seeking health care among many rural citizens. Thus, legislation like the $10 million Growing Rural Economies with Access to Technology (GREAT) hopes to address not only the poor economic conditions but also improve citizens’ well-being (Irons & Sauer, 2018, p. 368). This spending law will create jobs, improve education, and expand industries into these regions. Lawmakers expect to see increased income and opportunities for citizens to engage in healthy living.

Researchers have well established the correlation between rural living and poor health care access resulting in negative patient outcomes. While the NC legislature, health department, and medical colleges have taken steps to ameliorate this issue, many residents feel that these policies have been inadequate. Underlying issues in these regions are mainly due to the lack of healthcare workers and lifestyles that do not emphasize physical well-being. Researchers suggest that establishing medical training centers with incentives for maintaining staff coupled with increased economic opportunities for communities might prove more effective than current methods. Considering the length of this issue and the evolution of the medical field advocates are optimistic that residents of rural NC will have improved access to the healthcare they deserve.