By the time of this walkshop, changes had been in motion. The campus’s number of COVID cases was high enough that they sent us home, so I was back in Wilmington. My parents wanted to go on the boat in the morning, so I decided to come with them. We left from our dock and boated to Figure 8 Island, a private island with a guarded bridge to keep non residents out… at least by land. It was a windy morning, the gust tangling my hair and trying to snatch my hat, but still bright and sunny as we boated out. Before we even arrived, I saw something beautiful- a single dolphin, swimming through the intracoastal.

The first thing I noticed as we approached Figure 8 Island was the sunlight, the alluring glow as it struck the water just before the shore. It’s 9:3o, a few hours too late to see sunrise on the ocean, but the shine of the waves hitting the backside of the island still takes the breath away. 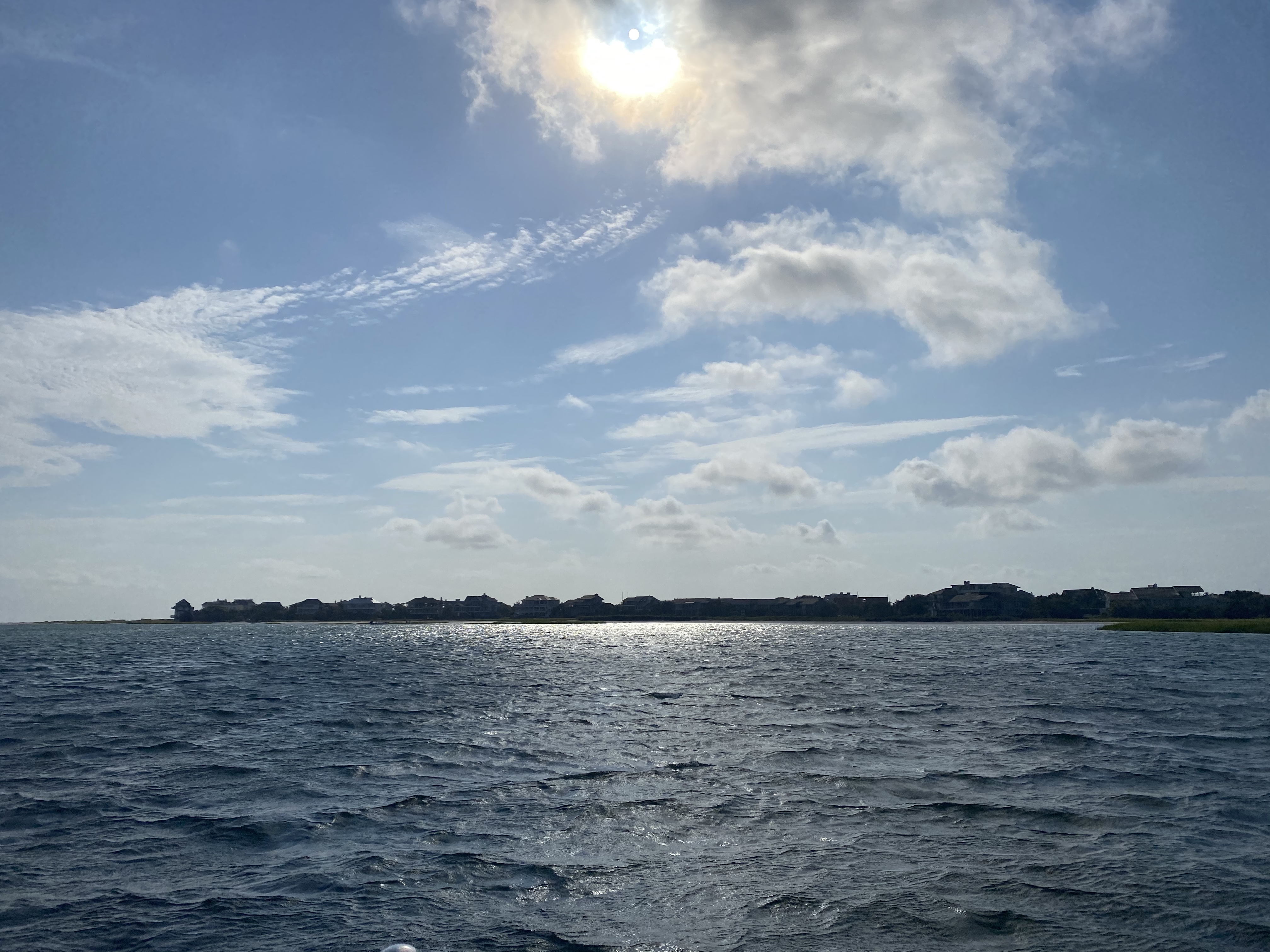 As is becoming habit, the first thing I do when I begin my walk is open my trusty Strava app. The thing about intracoastal islands is that their shoreline is subject to change depending on the tides. Strava is also subject to change, having a tendency to “self correct” if it thinks you are walking in a place that can’t really be walked on. I say this so you know, dear adventurer, to take the images below with a grain of salt- or sand!

After the podcast ended, I decided to continue in the habit of my last walkshop, and recorded the sounds of the remainder of the walk. As I’ve already mentioned, the day was ridiculously windy around that time, with a wind speed between 14-16 mph, and a wind gust of 22 mph. As such, the audio below is extreme, the harsh sound of the wind overpowering the crash of the waves, the occasional seagull, and the sound of my feet on the sandy shore. Feel free to listen with the volume low, if you want to feel what sort of ambiance I had to work with.

“When we walk, we are invisible motion, in visible motion” says Marzan.  “Walking belongs to everyone. We do not own walking, and no artist owns walking”. These words feel right to me, this idea of a collective ownership, a shared “right” to this near-universal part of the human experience. Our first steps are considered a developmental milestone, and autonomy is inherently connected to ownership over our own movements, whether that means unaided, with cane or walker, or in a wheelchair.

The professor begins by explaining that we will be following scores. A score, he says, is a series of actions meant to be re-interpreted by the artist. The bond between music and art is a strong one, and professor Marzan goes into detail about it. I walk as he talks, listening and taking photos. The score, after all, is a combination of documentation and preservation of an artistic idea. This score is inspired by Francesco Careri’s first two chapters, which I wrote about recently. We also have a “nomadic mantra” today, which I am to keep in mind throughout the walk.

I think about this mantra as I walk, trailing behind my parents, looking around. They don’t consider their own walk really begun until we get to the front side, so as we walk away from the boat, following the curve of the shore, their pace is brisk.  I am also on the lookout for shells, part of our tradition 15 years in the making, finding particular shapes and colors, hoping for an intact sand-dollar or perfect piece of coral.

Professor Marzan tells us a bit more about the scores. We will be asked to perform [action] upon [noun], until such time that we spot a stone. It is up to us to interpret what each score means. In the meantime, I am still taking photos.

Our first prompt is “to climb a stone”.  By this time, we have rounded the corner of the island and are on the front side, the side actually facing the ocean. I scan the area around me, and spot a small dune, carved by the wind as if it was placed, fully formed, upon the sand, a solid and separate entity. The one next to it, while less refined, has a sloping edge that looks easier to climb up without disturbing it. The sand itself is a collection of tiny stones, so I approach the second dune, climbing upon it. I take photos of course, of the “stone” from a distance as well as when I am upon it.

I consider the dune to be both the stone needed for the score, and the stone signaling completion of the score. I move on, continuing my walk. “To perceive a city” comes next. This is a tough one, given my current location. There are houses on Figure 8 of course, but it is very much a single neighborhood within the city of Wilmington. I perceive that quite clearly. However, the island beyond it is the island of Wrightsville Beach, its own separate city. I can barely, just barely, perceive this other island. I am at the far south end of Figure 8, and Wrightsville is beyond its north end. It is a line of tall hotels, parking garages, and other mini-skyscrapers jutting out into the water. Perception is more about awareness than seeing, so I have technically perceived two cities from this vantage point.

The wind has refused to let up, and between that and the heat, the beach is rather empty. There is something tranquil about that, about being in an open space without anyone else around, aside from my parents. I am walking beside them when the next score comes, “to navigate a forest”. There isn’t any forest, not in the traditional sense, but the grasses and low-lying bushes of the dune are a nice equivalent. They are hardy plants, able to withstand and recover from the hurricanes that bombard the intracoastal islands.

Onwards we continue, the next prompt following in what feels to be rather quickly. “To populate sensations” the score says, and so I do. Populating refers to filling a domain, and the domain of sensations, of touch in plurality, is quick to be filled on a beach. I stretch my toes, really inhabiting the feelings beneath my feet, and when I find things to touch, I kneel down, letting the grains of sand grind into my knees, sensations upon sensations as the wind whips strands of hair into my face, tickling my lips and tangling in my lashes. My clothes shift each time I move, the softness of my shirt and shorts a stark contrast to the rough sand that clings to my skin.

“To host a desert” comes next. This is another one where I take some artistic liberties, playing fast and loose with definitions. A desert is a barren area of land, covered in sand. Isn’t a beach barren? I’d say it is, that the harsh conditions for plant life hold true on a beach as much as the Sahara. A traditional desert is without water, that is true. But Antartica is considered a desert, its salty surroundings notwithstanding. The ocean is no oasis, dehydrating as it is. So I look to see what counts as hosting. Generally speaking, to host is to be the place where something lives. How can one host a place?

What does it mean, I wonder, “to trace symbolic values”? Well, a trace is a mark left by something that has passed. A symbol, of course, stands in for something else. So what can I find on the beach that shows traces of symbolic value? The answer, of course, is in the sand. There is constant motion on the beach, two great forces molding it over time: man and nature. Man’s symbolic traces are our footprints, left behind as we walk and symbolizing the path. Nature’s symbolic traces are lines in the sand, bands of color in the shape of ripples, left behind by the elements and symbolizing the winds and waves.

I think “to discover a path” has a few interpretations. The path you choose to take, the journey you go on, depends on your mode of transportation. On the beach, the paths are numerous, and your limits are few. On a busier day, I could expect to see bikers, surfers, swimmers, drivers, and runners, all approaching the path from their own way. Today it is quiet, but not empty. Here are a few paths I have discovered in use:

I see that we are farther along now. The next score is a familiar one, something I already have been performing: “to take objects”. The beach, by its very nature, is a collection of objects. If you lose something to the ocean, eventually it will turn up on a sandy shore. That is the nature of the tides. Unfortunately, I did not find any “special” objects, any hidden treasures lost to time. But that’s okay. I like the shells better anways.

“To interact with an enclosure” felt strange to me, as there are no enclosures on the beach, not really. But, I am nothing if not good at improvisation. I look towards the houses, take stock of what is there. The answer rises before me in a neat row: a series of short fences just below the dunes. I’m looking at sand fencing, a method of protecting beaches from erosion by using fences to block the wind. An enclosure is an area that is sealed off with some sort of barrier, so I make my way up, then make myself comfortable within.

We have turned around at this point, and are making our way back. I take a zig-zag path, trying not to walk in the same spot twice. This is close to the end, I realize, when the next comes: “to listen to a hole”. Here, I think, is the new height of absurdity: I have to find a hole! Of course, the beach is not without its holes, but to scrounge one up on the spot is a bit more tricky. I walk slowly, cast my eyes to the ground, looking for a sign. Until finally I see something, a familiar shape that usually indicates a hole is nearby. I don’t actually find one, but I do sit and listen, just in case. If you’ve ever seen a crab dig his hole, you’ll know the sounds. I kept searching until my rock prompted me to move forward.

This is the last one. I am prompted “to invent a form”, and so I do. I look for naturally occurring juxtaposed items, things that seem innocuous by themselves but take on a new meaning when together. I only find a few, but it is easy to imagine a new form for them, which I will later sketch out for myself.

As the professor concludes the walkshop, he suggests we smile. Smiling, he claims, refreshes our being, reminding us that we are here. I find the notion rather sweet, rather smile worthy. As I finish the walk, recording the sounds of my return trip, I begin to plan some sketches to do on the boat (bumpy though it may be), grinning all the way. I am enjoying the sun’s rays, am invigorated by the sea air. It’s a pity that we had to leave campus, but Wilmington is a lovely place to wander. 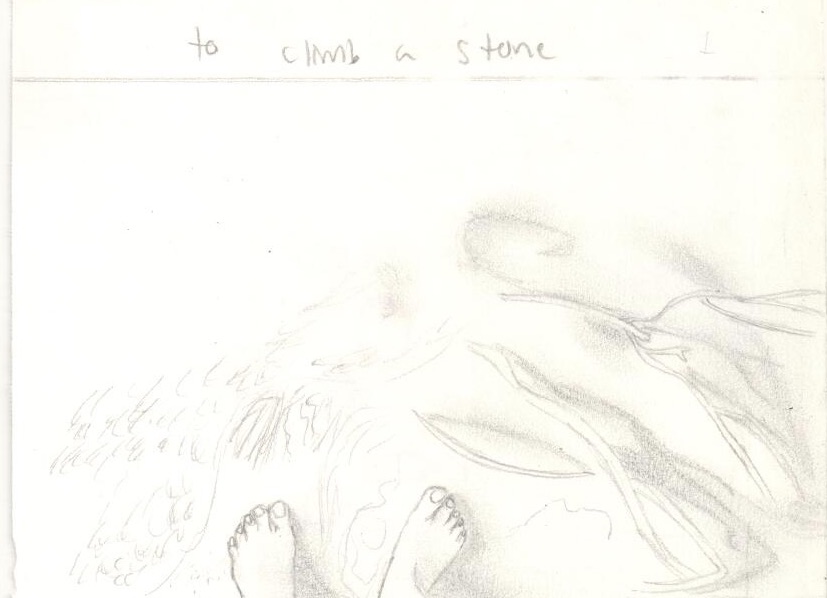 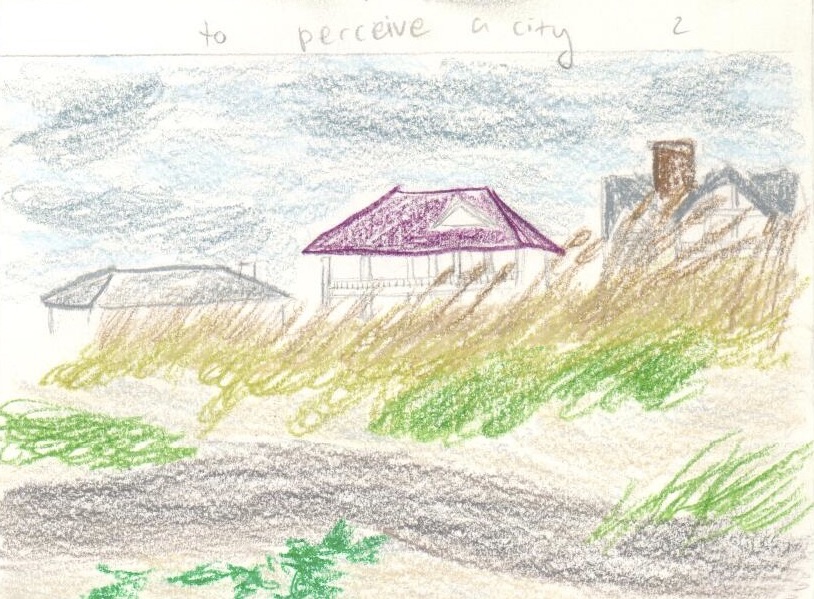 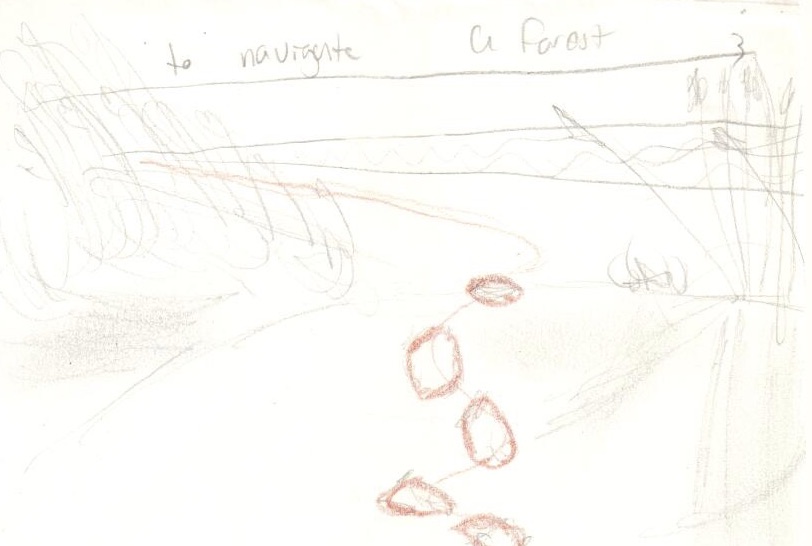 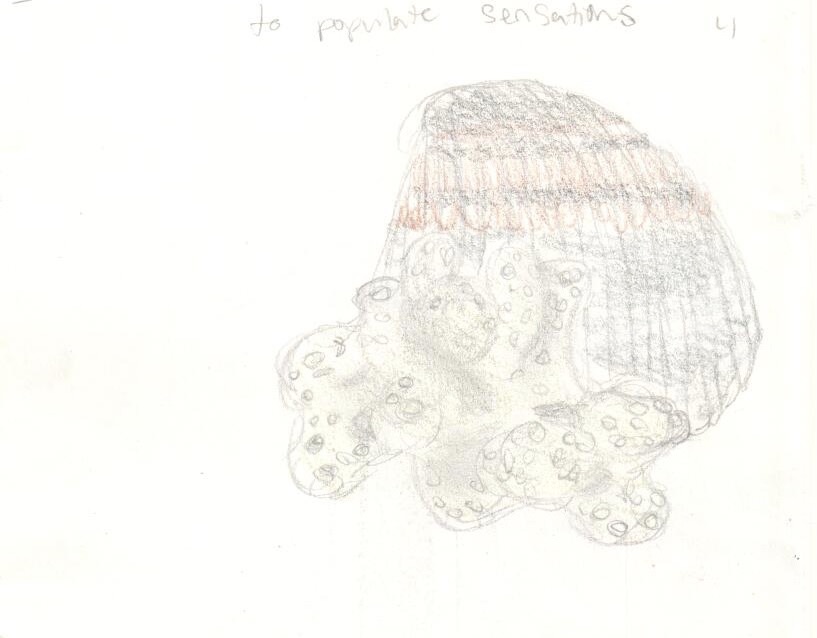 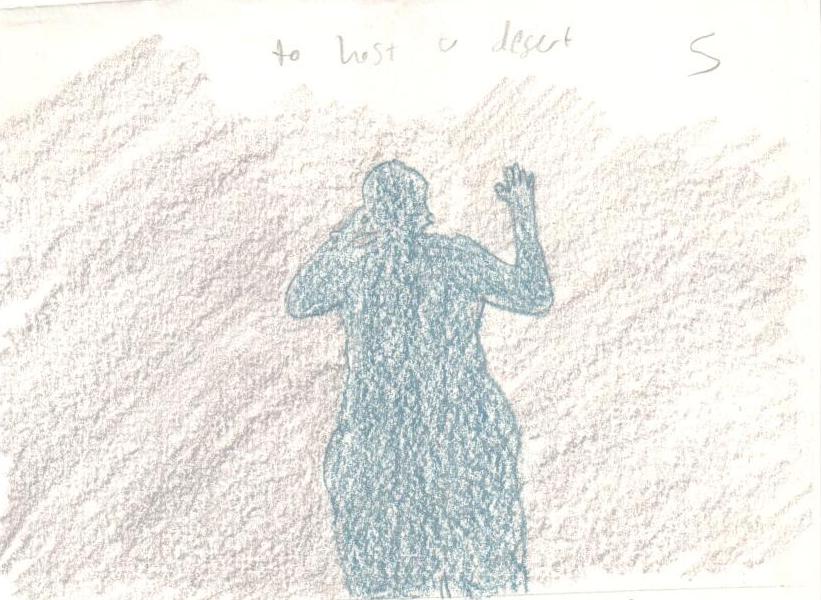 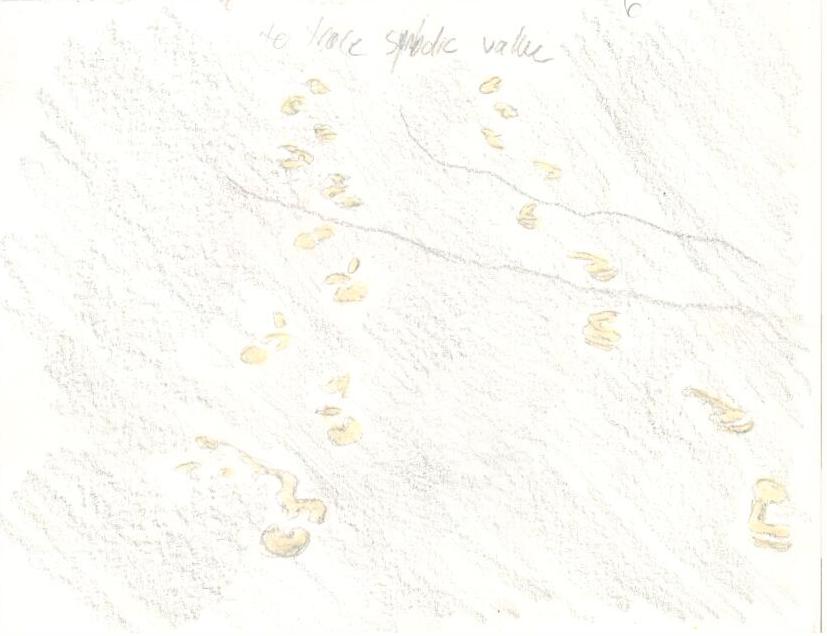 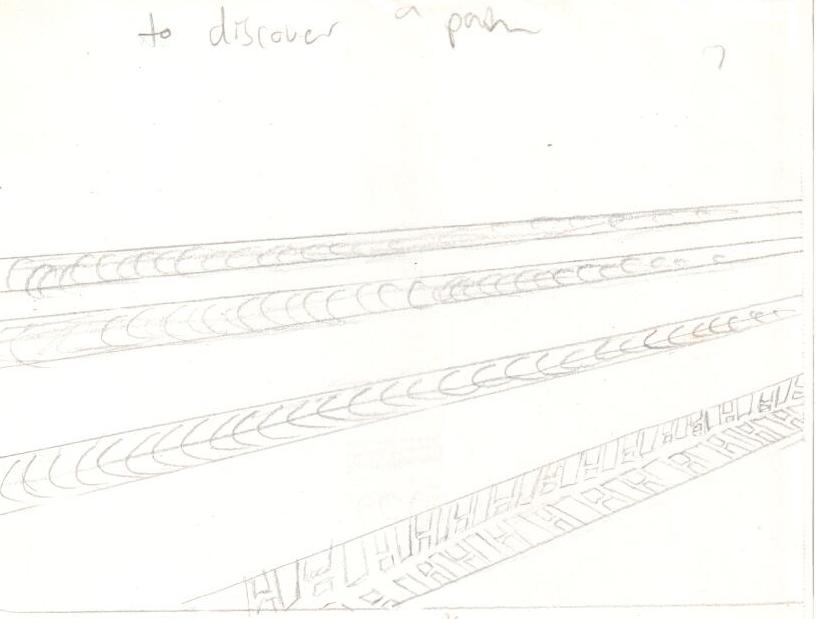 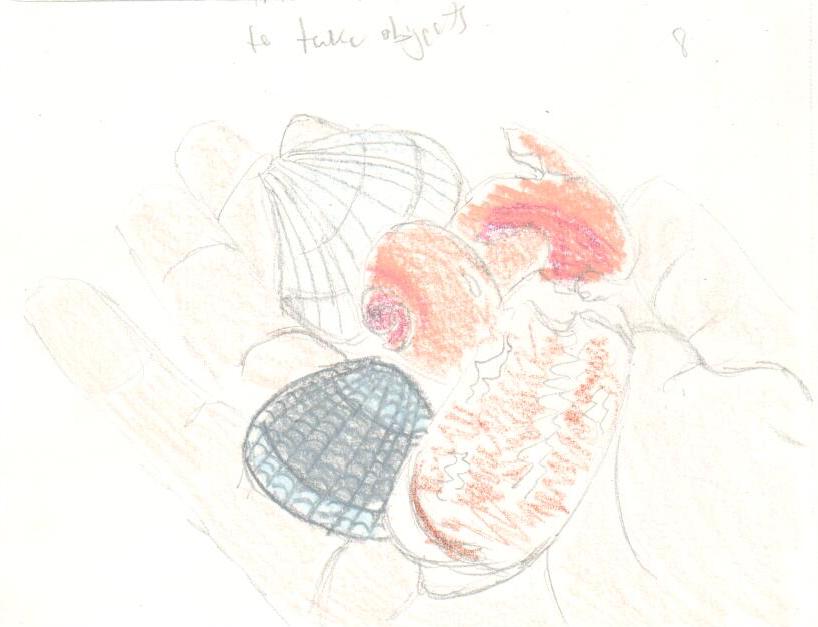 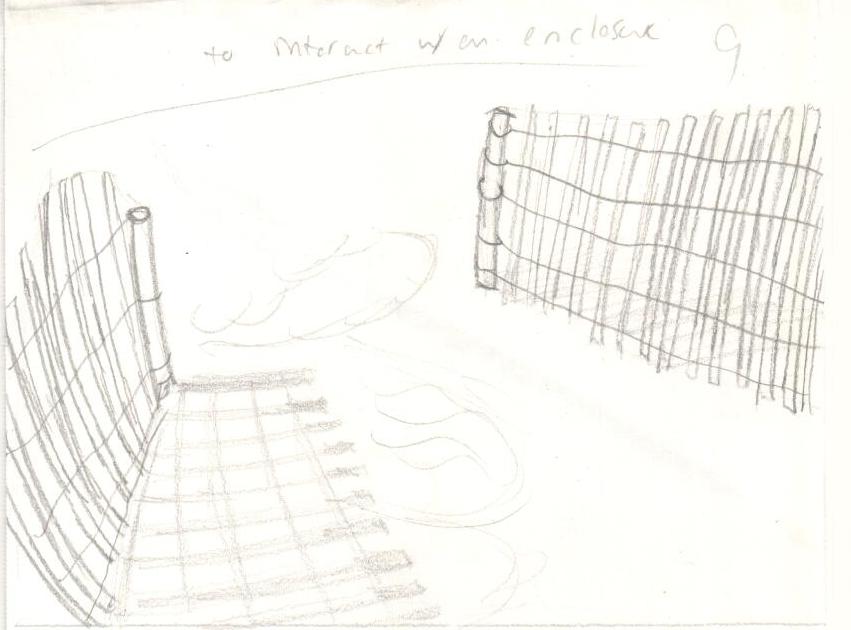 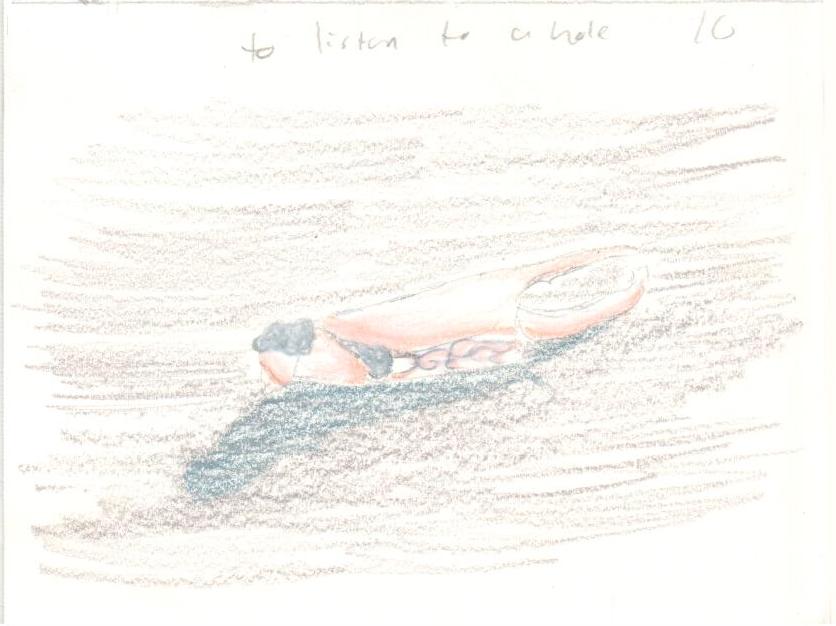 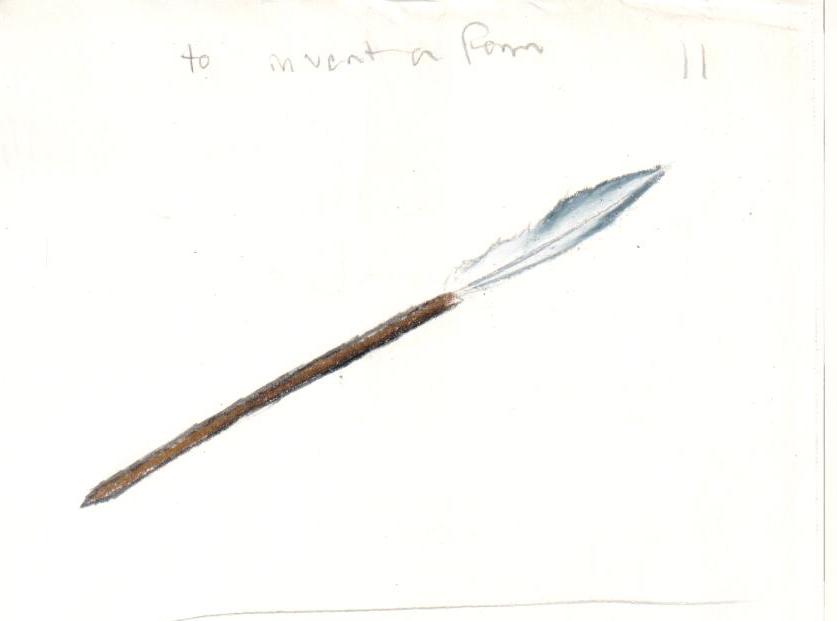 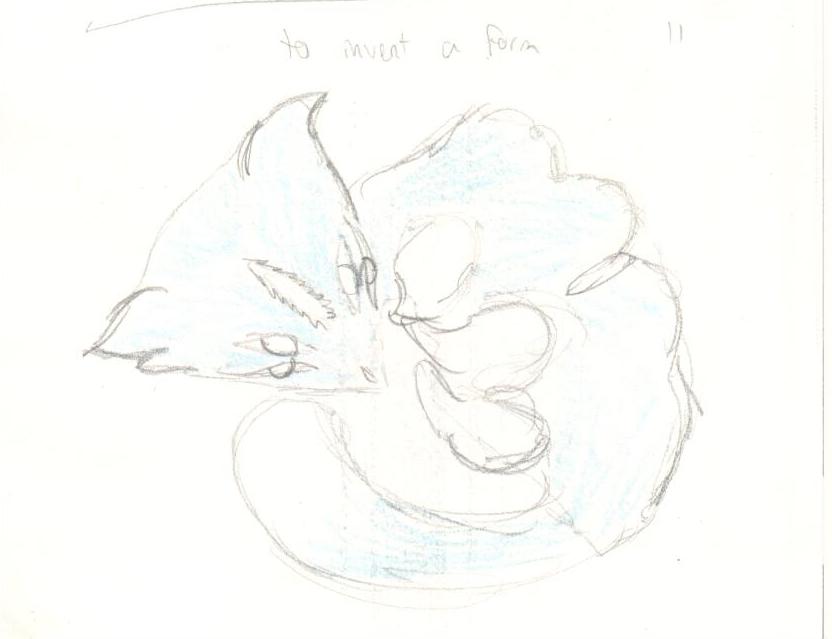